“I have a funny story, right?” my British gal-pal said on the phone.  “We were all talking at the office the other day about what to do this weekend, and one of the girls in the office said she was going to Temple Bar.  It reminded me of that time a couple years back when we went to Boa, and then went with that guy – remember?”  I remembered.  I could also hear my girlfriend’s laughter in her voice.  It sounded like she was going to cry, it tickled her so.  “I told them, ‘I’ve GOT to tell you a funny story!  My girlfriend Lisa Jey and I went there one night – and Lisa Jey thought she was one of the ‘sistahs” – remember that?”  Why did she keep asking me that?  I remembered.  I laughed too. I was a crack up, I’m sure.

Here’s how it went down: (and no, I didn’t say ‘it went down’ to sound like I am a rapper or hipper-cooler chick than I am – that’s really how I talk, okay?) Basically, my friend Sheila (I’ve changed her name to protect her innocence.  Lord knows she needs it! ha ha) and I are the best of friends.  We are like sisters.  We get asked it all the time, too – whether we are sisters.  But she’s got this great British accent, and if there is some type of food I won’t eat – like bread or butter – she eats it, and still remains thin. Sometimes I hate her for that. 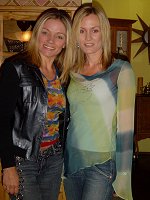 Me (left) and my “Sistah” “Sheila”
Pretty lucky to be asked if we are sisters, eh?

I was scheduled that fall to fly out to Los Angeles to work on Soul Train’s Lady of Soul Awards, no less.  Just before my trip, Sheila got a sizable promotion or bonus or something at work.  I’d also just sold a piece of real estate and made a sizable profit.  We agreed we’d celebrate together when I was back in LA.

Sheila picked Boa, a wonderful steakhouse in Santa Monica with a very chic atmosphere, replete with bistro tables all in a row (and very close to each other), and a fantastic wine list.  About a third the way through dinner, a gentleman sat down at the table next to us who was obviously on his own.  He wasn’t bad looking either.  He had dark skin – so immediately I pegged him as potential for Sheila. She likes dark and handsome guys.  I wasn’t sure, though, as he seemed a tad-bit old for her.  She also likes younger guys.

Well, after we’d polished off a bottle of wine, I couldn’t help but strike up a conversation with this guy. He just sort of kept glancing sideways at us, and our tables were so close, he may as well have been sitting with us.  Once the introductions were out of the way, and after a couple more cocktails, we learned our new friend, Kevin Sullivan was a fairly well-known director.  His most recognizable directorial project was probably “How Stella Got Her Groove Back.”

We talked about lots of things, and were getting along swimmingly (it’s the closest I’ll ever come to being British – using that sort of vernacular), when our bill appeared, and it was apparently time to move on.  We were discussing options when Kevin said he’d been to a club nearby that plays live music, and it was pretty cool. He even offered to drive, as he’d not been drinking.  I’d worked all day with the Lady of Soul gals, and one of them mentioned she was going to Temple Bar as well.  I thought it sounded great.

We walked into Temple Bar, and immediately we could see that we were in Sheila HEAVEN.  If there was ever a place where all the people from the hip-hop and R&B communities hang out, THIS was it!  Sheila and Kevin seemed to be getting along a little better than before (they were arm in arm now), so I took my cue to do some of my famous Ms. Cheevious social fluttering.  I took my drink and proceeded to try and blend in. 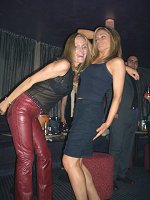 The bar area had a dark atmosphere, with black wooden booths in the bar area, and red velvet accents.  I strutted past the booths, with guys and their girls lounging around looking at me as if I were on exhibit at the zoo.  I have to say, I am extremely white.  I have long blonde hair, and I live in Colorado most of the time.  This doesn’t mean much, accept for the fact that it contributes to my whiteness.  There isn’t much opportunity for sun bathing in Aspen.  So, on this particular night I was whiter than usual, and I felt it.  I could feel the gazes of the “brothers” on me, and their women too.  I struck up conversations with perfect strangers, and even shared a drink (by this time, I’d switched to water) with one group.  I decided to continue fluttering.  There was a wide opening to another room where a lot of people were crowding near the stage.  They had live music that night, and the band was exceptional – the kind you might only hear in LA or NY.  ‘Ooooh!’ I thought tipsily, ‘They’re good! How fun!’ as I proceeded to inject my whiteness into the sea of black beauties and groupies in the crowd.

Sheila and Kevin stayed toward the back of the room, as the lead singer jumped down  into the midst of the crowd.  I am a sucker for an exceptional vocal talent, and he had it.  He sang those R&B runs and his voice went all over the musical landscape – but with incredible finesse.  He was good looking too.  That didn’t hurt, as he tried to get the crowd of mostly women excited about his song.

Then it happened. He started to do this scatting thing back and forth with a few select little cuties in the crowd, and somehow – don’t ask me how or why – it must have been the alcohol – I decided I needed to get up there and vie for my turn at the mic.  ‘Why not?’ I reasoned with myself.  ‘I was a singer!  I use to practice this kind of stuff all the time, and I was good too! Plus there was that time I ROCKED scatting with the guy at Nic’s Martini Lounge in Beverly Hills!  This can’t be that different!’  No matter that I’d not sung professionally, or even practiced in several years – or the fact that I was somewhat inebriated, and probably not even speaking clearly. I was determined!   So, I careful maneuvered my way toward the area where this hot R&B vocalist was doing his “thing” and watched, smiling, waiting for my turn.  The other girls nearby bounced with me to the beat (See?  How white is that?).

He was singing this one line, something like “I said, tell me what you are looking for???”  And then he would put the microphone in front of a few of the faces in the crowd, who immediately backed away.  I was right there with him, and ready to go. So, when he repeated his line to me, “I said TELLLL me what you are LOOOOOKING  forrrr?”  I leaned in and – in my mind and in my heart I sang as hip and cool as Mariah Carey.  I could hang with the best of them, as the words “Much betttttter!” came out of my mouth.  Only the sound that actually came out was not what I’d envisioned for myself on my big lucky break.  Here I was scatting back and forth with this guy, and my voice felt like it was stuck in tar.  I couldn’t make it move fast at all!  Plus, I missed quite a few notes!  But I gave it my ALL.  I tell ya, it was an exhilarating experience, and now I know what it feels like to sing very badly in public!  It was hysterical!

After it was all over, and my singing partner had moved on, I turned to one of the girls next to me and exclaimed, “Oh my god! That was so bad!”  And she kindly said, “Girl! You held your own!  You were right on!”  Which led me to think that everyone in that place was drunk anyway, and none of it really mattered!

I meandered back to Sheila and Kevin.  Sheila had a mocking smile on her face, and as soon as I got close enough, she said, laughing, “What were you doing?  Do you think you’re a sister now or something?” I just laughed and threw out some cliched response, but the truth was I had a blast, and it’s one of my favorite memories to this day.

So what can we all learn from this boys and girls?  That if you aren’t willing to take chances or risks, you could miss out on the spice of life?  Yes.  But more than that, if you’re in need of getting your groove on, or you’ve been living a suburban existence, or perhaps you’ve just been working too hard –  make a trip to Temple Bar in Santa Monica.  I did.  I’d been living in Colorado, and hadn’t been out singing in a very long time. It’s how I got my groove back!

Register to receive these posts by email and get my eBook “Ahhhhh…Haaaaaa Moments with Ms. Cheevious” for FREE. Registration is on the right side bar of every blog post. See you next time.

Ms. Cheevious is the alter-ego of Lisa Jey Davis (former publicist, and television talent manager, current award-winning writer & author, & health and fitness pro). Though Ms. Cheevious has become known for humor via the blog and social media, offering a lighter and brighter look at life… the blog was originally a precursor to Lisa Jey's long overdue book "Ms. Cheevious in Hollywood" which offers a fabulous, funny peek into what really goes on behind the scenes in Hollywood… a Hollywood with Lisa Jey and her funny “serendipities” in it. Think Lucille Ball meets Chelsea Handler meets the girl next door (with a little chocolate and vodka). It depicts with hilarity the innocent mistakes Lisa Jey made when launched back into the big, bad single jungle, as an unassuming single-mother in the City of Angels. It’s also about the beautiful, interesting life she led while her loving, incredible sons kept her grounded and sane amid fantastic events, new friends, parties and field trips. It also shows the turmoil and heartbreak that comes with dating and single mom life. All blog content © 2015 Ms. Cheevious aka Lisa Jey Davis

Ms. Cheevious is the alter-ego of Lisa Jey Davis (former publicist, and television talent manager, current award-winning writer & author, & health and fitness pro). Though Ms. Cheevious has become known for humor via the blog and social media, offering a lighter and brighter look at life… the blog was originally a precursor to Lisa Jey's long overdue book "Ms. Cheevious in Hollywood" which offers a fabulous, funny peek into what really goes on behind the scenes in Hollywood… a Hollywood with Lisa Jey and her funny “serendipities” in it. Think Lucille Ball meets Chelsea Handler meets the girl next door (with a little chocolate and vodka). It depicts with hilarity the innocent mistakes Lisa Jey made when launched back into the big, bad single jungle, as an unassuming single-mother in the City of Angels. It’s also about the beautiful, interesting life she led while her loving, incredible sons kept her grounded and sane amid fantastic events, new friends, parties and field trips. It also shows the turmoil and heartbreak that comes with dating and single mom life. All blog content © 2015 Ms. Cheevious aka Lisa Jey Davis